About The Senior Cast Of The Spectacular Follies 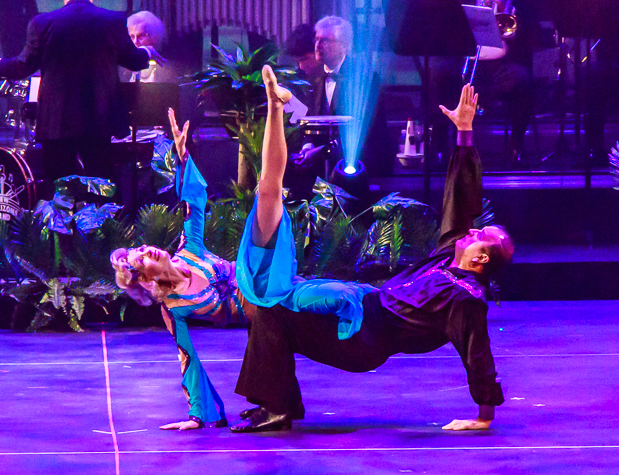 If you believe that turning 55 is synonymous with entering old age, you’ve never met the cast of the Spectacular Follies. The entertainers range in age from 55 to 98 years old. Yes, our founder, Ned Startzel, is still performing in the Follies at the age of 98. The Follies is not, in any sense of the word, an amateur show; it is an all-live beautifully staged, lavishly costumed production that rivals any show you’ll see on Broadway.

The Follies is a very special show. You can feel the energy when you enter the rehearsal hall as your eyes wander around the great space filled with groups of women in tap shoes working out a dance routine, or the men’s chorus harmonizing together in another corner. At the other end of the hall, you’ll see the famous Follies showgirls being rehearsed to parade gracefully down the grand staircase wearing impossibly large feather headdresses. But what you’ll notice most is the enthusiasm and the smiles on the faces of the performers. These seniors are having the time of their lives and these high-energy acts show no signs of slowing down.

Each season brings the Follies new and exciting acts all wanting the chance to perform and relive their glory days. Word spread out in the theater community about the opportunity for retired performers over the age of 55 to ‘strut their stuff’ on the big Follies stage and brought us many new faces for the auditions held in April. There were over 250 talented people who came out over the 2-day casting to sing, dance and hope for one of the coveted spots in the Follies. There were over 35 gorgeous women competing to be a famous Follies Showgirl and you won’t believe the eleven showgirls selected for 2017 are seniors. The youthfulness and vigor of all the hopeful entertainers proved that you’re never too old to make your dreams come true.

Our all-volunteer cast comes to us from all across the US and all look forward to the September performances in Dallas. We feature entertainers who originally found their fame in places like Hollywood, Las Vegas, Savannah, Florida, New York and many other locations known for their great entertainment.

The 2017 Follies presents “The Fabulous 50’s” and will stroll down memory lane and present a musical event that showcases the innocence of a time when the whole family sat together to watch Ed Sullivan’s TV show and will go all the way through the decade.

Remember when we rushed home from school to watch American Bandstand and all the other local teen-aged dance shows that spread across the country at the time? The post-war baby boom led to youthful audiences wanting to hear music to call their own and the 1950’s supplied them with young at heart songs and dances that pushed the decade from crooners like Pat Boone to more raucous music that brought us Doo-Wop, Elvis and Rock and Roll. The Follies will bring all these memories back to life with hit after hit that are still remembered today with great joy and nostalgia.

The Spectacular Follies is happy to announce that special guest performers, Dallas Doo-Wop, will be joining the cast this year. You’ll sing along and tap your toes as your favorite Doo-Wop songs are presented.

Dallas Doo-Wop perform doo-wop vocal harmony in the original doo-wop style. Originally named “The Embers” in their senior year at Woodrow High, they soon began to win school talent shows and perform for assemblies. In one of their few performances outside school walls, Dallas Doo-Wop won second place in a Central Dads Club Talent Contest at State Fair Music Hall. They have been a Dallas favorite ever since and continue to fill venues whenever they perform.

The Follies began in 2005 when Ned Startzel and Mark Carroll, two former Dallas showmen, came up with an idea to stage a senior showcase to highlight the talents of local seniors who love live theater and wanted to continue to perform. After years of planning, the Spectacular Follies debuted on stage at the Eisemann Center for Performing Arts in 2008 becoming an instant success and a yearly theatrical event celebrating its 9th year entertaining audiences in Dallas.

The Follies is directed and choreographed by Broadway Tony winner, Michael Serrecchia. The Follies artistic director, Dee Anne Meece, has performed with Dolly Parton, Johnny Cash, Glenn Campbell, Bob Hope, and several other stars. Andy Michlin, musical director, has worked with show business legends such as Tom Jones, Lisa Minnelli and Linda Carter and the New Christie Minstrels. Bill Geyer, who had stints with the Harry James, Orrin Tucker and Don Ellis Orchestras, will again direct the Up Swing big band. Michael Robinson, Follies costumer, will outfit the cast and the lavish costumes for the Follies Showgirls, using all the sequins, rhinestones, feathers and beads he can find.

The Spectacular Follies presents wholesome entertainment for all ages and theater tastes The mix of seniors, middle-aged and young children in the audience make the Follies a true family destination that everyone can share together.

The Follies will run in Dallas at the Eisemann Center for Performing Arts from Thursday, September 14 through Sunday, September 17 with matinees daily at 2 pm. There will also be an evening show on Saturday, September 16 at 7 pm.

The Spectacular Follies tickets are now on sale at the Eisemann Theater Box Office (www.eisemanncenter.com ) or by phone, 972-744-4650 ext. 4. Group discounts are available. Visit the website www.spectacularfollies.com for more information on the Follies.