On the Cover of Celebration Magazine – Celebrating 10 Years of Entertainment 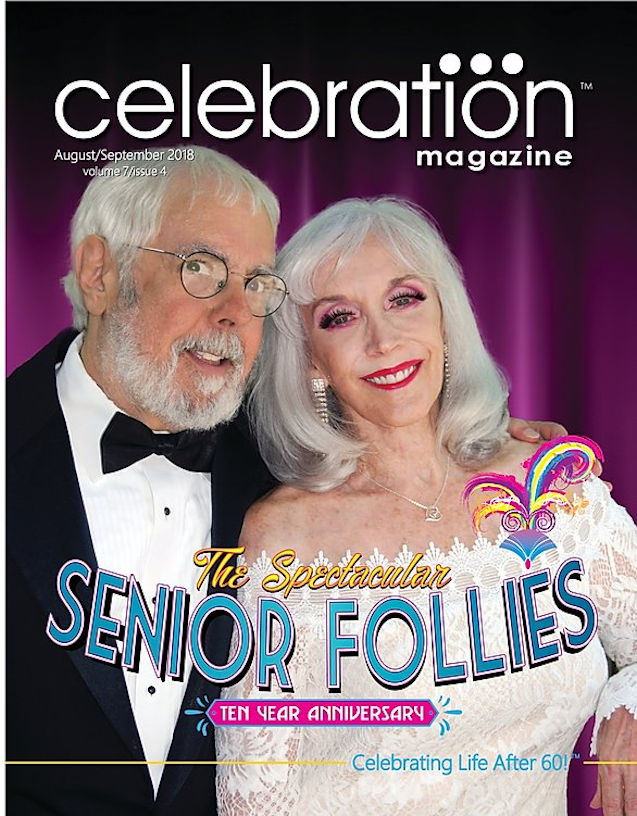 By Stacy Allen Dominguez of The Spectacular Follies

When the curtain goes up on September 20, The Spectacular Senior Follies will be presenting its special anniversary production, “Encore! Everything Old Is New Again.” A tribute to the longevity of the Follies, the show will highlight its best of the first 10 years by presenting many of the favorite songs, dances and comedy acts that entertained the audiences over the years.

The Follies opened its first show on the stage of the Eisemann Center for Performing Arts in 2008 and nobody could have predicted the success the show would have that year and nobody dreamed that the Follies would be celebrating a decade of entertaining the Dallas area with a musical revue featuring entertainers over the age of 55. But, here we are, bigger and better than ever imagined.

In 2005, the late businessman, Ned Startzel and Dallas showman, Mark Carroll, came up with an idea to stage a Ziegfeld/Las Vegas type of senior showcase with singers, dancers and a line of beautiful showgirls to highlight the talents of local seniors who love live theater and wanted to continue to perform. After 3 years of planning, the Follies opened and has been a huge draw ever since. Themes have varied over the years and have presented shows featuring the music of great composers such as Gershwin, Porter and Berlin, as well as country, rock and well-known entertainers as Sinatra, Astaire and Marilyn. Tributes to Broadway, the ‘50s, the ‘60s and other genres, such as the patriotic finale honoring our military, have shown the scope of talent the cast has to offer.

Much of the success of the Follies is due to our Celebration Magazine cover stars, Andy and Judy Michlin. Andy has been musical director of the Follies from its first days and has directed his band on stage for all of the years of the shows. His lovely wife, Judy, has been one of the beautiful showgirls the Follies features every year. They truly embody the true spirit of the Follies cast.

Andy and Judy, both Dallas natives, met as adults in Las Vegas and it was attraction at first sight. Andy, already a professional musician when he graduated from Highland Park High School, was part of a Tom Jones tour as pianist when he met Judy, a single mother raising 2 children, who happened to visit Las Vegas while on an across the country vacation. They hit it off so well, that whenever his schedule brought him through the Dallas area they became very close friends, which led to dating and after a 5-year courtship, they returned to Las Vegas and got married at The Little White Chapel in the city where their story began.

Andy and Judy were both very busy people, Andy worked with many great acts and toured the world for 30 years with such luminaries as Tom Jones, Liza Minnelli, Lou Rawls, Louis Prima and Lynda Carter and was a member of the New Christie Minstrels. He appeared on many TV shows, including The Tonight Show, Merv Griffin, Mike Douglas, The Kraft Music Hall, Don Kirschner’s Rock Concert, The Dinah Shore Show and many others. In Dallas, Andy performed with Bowley and Wilson, The Gentleman’s Club, The Chickenhawks and Dallas Doo Wop.

Judy has always had the spirit of an entrepreneur and learned early that life is full of risks and knew that she had to take chances to succeed. After a long career as a public relations executive with TracyLocke, she spread her wings and tried many avenues to grow and success followed her many endeavors. As a real estate flipper, Judy and her daughter turned many old buildings from “ugly ducklings into beautiful swans.” Not satisfied with that, she decided to change direction and be one of Dallas’ first charity bingo hall proprietors. As success always follows Judy around, she now owns 3 successful charity bingo halls all over the Dallas area.

Claiming that she ‘had no talent’, Judy became a Follies showgirl in 2008 when she took her granddaughter to study music with Mark Carroll, who at the time was planning the first Follies. Although only 5’2”, Mark insisted that Judy’s beauty would be an asset and convinced her to be the first showgirl he hired. Judy took on the challenge and has been in the Follies every year and with her trademark ‘kiss to the audience’, her gracefulness and beautiful smile made her an audience favorite.

Always thinking of ways to make the Follies more fun for the cast and audience, Judy came up with the idea that there should be cast members in costume in the theater lobby prior to the show to ‘meet and greet’ the audience as they arrived. It was a big hit with the audience and now a regular part of the Follies experience.

Judy and Andy became one of the favorite couples in the show as the Follies grew larger every season. Judy appointed herself the welcoming committee to all the new cast members, getting to know them and showing them the ropes during rehearsals and performances. She introduced them to the other performers, always making sure they enjoyed themselves both backstage and on. Andy, who played piano for most of the acts, worked long hours with cast members to fine tune their performances and give them the confidence to perform with poise and professionalism. Andy would go over a song until the performer was sure of every note they sang or danced to. The cast always claims the Michlins are the champions of the Follies.

The Follies is thrilled to have a stellar creative team leading the way. Directed and choreographed by Michael Serrecchia. Director of many successful productions in Dallas and the North Texas area and is the recipient of many coveted awards for his work. Dee Anne Meece, Artistic Director, is from Dallas and is an accomplished singer and actress and has performed all over the area. She and her husband Michael, (who is a theatrical producer) own a very successful theatre in Savannah, Georgia.

Michael Robinson, Follies costumer, will outfit the cast and design the lavish costumes for the Follies Showgirls, using all the sequins, rhinestones, feathers and beads he can find. New to the Follies this year will be orchestra leader, Jeremy Kondrat, who will conduct The McKinney Community Band from the theater pit.

The Follies’ anniversary show will include many favorite performers, and is very excited to once again present Mark Carroll and Trella Hart. Our cast of talented performers comes from many different professional backgrounds such as Las Vegas, Broadway, Hollywood and other places across the country and all enjoy performing and showing their talents to other seniors in the area.

Over the 5 performances, the Spectacular Senior Follies entertains thousands of enthusiastic audience members who enjoy an afternoon of fun and a chance to relive the days of live theater. The mix of seniors, middle aged and young children make the Follies a true family destination that everyone can share together. The Follies presents wholesome entertainment for all ages and theater tastes.

Being a 501-C-3 charity, the mission of the Spectacular Senior Follies is to preserve the traditions and legacy of the American performing arts for future generations, provide community outreach that inspires all age groups, educate by example and reinforce the vibrancy of seniors by presenting high quality performances with senior entertainers 55 and older. Each cast member lives up to this mission with every performance.

The Follies will run 5 performances in Dallas at the Eisemann Center for Performing Arts from Thursday, September 20 through Sunday, September 23 with matinees daily at 2pm. There will also be an evening show on Saturday, September 22 at 7pm.

The Spectacular Senior Follies tickets are now on sale at the Eisemann Theater Box Office (www.eisemanncenter.com) or by phone, 972-744-4650 ext. 4. Group discounts are available. Visit the website https://www.spectacularfollies.com for more information on the Follies.