On the Cover of Celebration Magazine – The Spectacular Follies: Live on ZOOM 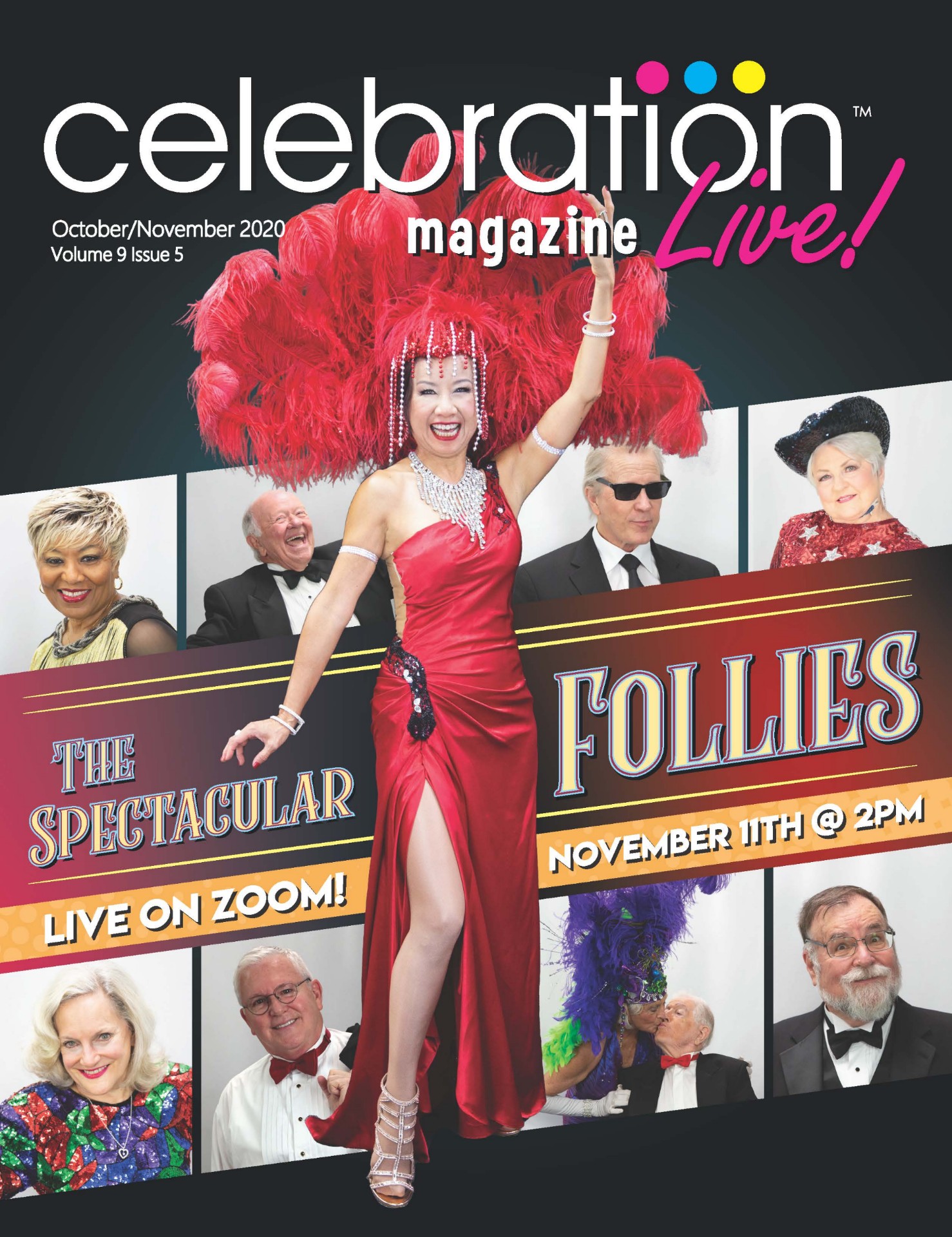 When we named our show the Spectacular Follies back in 2008, we wanted to conjure up an image in the minds of our audiences before they stepped foot in the theater. The words Spectacular and Follies both bring to mind images that we’ve tried to live up to for the past 12 years. When one hears ‘Spectacular’ when talking about a show, they envision a larger than life production that exceeds expectations with lavish sets, exceptional costumes and glorious singing and dancing. Using the term ‘Follies’ brings to mind a production with a variety of acts reminiscent of The Ziegfeld Follies, the Folies Bergere, Las Vegas and the great tradition of Vaudeville. Our founders wanted to bring all of these popular show business traditions to the stage, and, as sung in the great musical, “Gypsy,” ‘You gotta get a gimmick.’ The Spectacular Follies presents the best gimmick of all, everyone in our cast is over the age of 55, making us the longest running variety show in the country with a cast of over 100 talented entertainers who have spent a lifetime honing their craft to bring our audiences the best of the best in live entertainment. Some may call our cast seniors, but we prefer the term ‘seasoned.’

Each year, when the curtain opens on the Spectacular Follies, the audiences are treated to a vision they can’t get anywhere else. The stage is filled with a feast for the eyes and ears with big, fully choreographed production numbers featuring handsome men and beautiful women whose talent jumps over the footlights and grabs the audience from the first notes of the live band on stage. With scene after scene of beautiful music and dancing, the audiences sit up with attention enjoying each song and anticipating what will come next.

The Spectacular Follies is a two-hour tribute to great music and has featured the words and music of Berlin, Porter, Gershwin and many other famous composers whose timeless music is known to all and lives forever. Over the years the Follies has presented tributes to the great songs from the 40s to the 80s. From big band to Elvis to Doo Wop to Country, we’ve staged music everyone will recognize and enjoy. Last year the Follies added a classical section featuring some of the most beautiful and beloved music ever written.

Although the Follies produces a new show every season, the Spectacular Follies always presents audience favorites in every show. Many of our cast members have appeared in several of our productions but each year bring something original to delight the crowds. One of the most anticipated parts of the show is the presentation of the famous Follies Showgirls. The Showgirl presentation is a valentine to glamorous women of a certain age who appear in beautiful costumes covered in sequins and beads and parade down the grand staircase and glide across the stage wearing impossible, over-the-top feather head dresses. The audience reaction of oohs and ahs can be heard as these women defy age and prove that there is beauty and grace at every stage of life.
When Spectacular Follies’ founders Ned Startzel and Mark Carroll first envisioned producing a show in 2008 they knew that Dallas was home to many performers who had left the stage but were still active and looking for a chance to strut their stuff before an audience. They rounded up around 40 singers, dancers and musicians and staged a 3-hour musical revue and those who attended loved it and it became an instant hit.

The Spectacular Follies has gained a large audience following and now entertains over 4,000 theater goers each year and we add new fans of the Follies every season.
Over the past 11 years the Follies has auditioned and cast hundreds of performers who wanted to volunteer their time to be part of the show. The Follies has featured performers from all across the country, including Hollywood, Broadway, Las Vegas and many other entertainment cities. We’ve featured ballroom dancers, comedians, dance ensembles and even a few ventriloquist acts, always making sure we presented the true concept of variety. Our current productions feature over 100 dynamic entertainers who all hope to bring our audiences the most fun-filled and lively show in town.

When theaters reopen again, the Spectacular Follies will present “Decades!, the Soundtrack of Your Life.” Music at its best acts as a record of the emotions and stories we experience at a given moment in time. We’ve all been surrounded by music all of our lives and certain songs bring back forgotten memories. It happens when we hear the songs sung to us as children, or Mom and Dad listened to on the radio and danced to in the kitchen or from our school years that bring back thoughts of good times with friends or our first loves and as we got older we had ‘our song’ with a partner and later in life the tunes our own children and grandchildren introduced us to. We find that these melodies all become the soundtrack of life for each of us. The Follies hopes to reawaken these memories and help the audience relive the great times of their lives through songs and dances and beautiful memories.

The Spectacular Follies is on hiatus until we can safely bring our cast and audience back to the theater and we know that when that happens, we’ll bring the best of the Follies to honor the memories of our late founders, Ned Startzel and Mark Carroll who always dreamed of the Follies going on long after they departed.

But, while we wait till we can perform live again we look forward to seeing you on Zoom for our Celebration Magazine presentation on November 11th at 2:00pm.