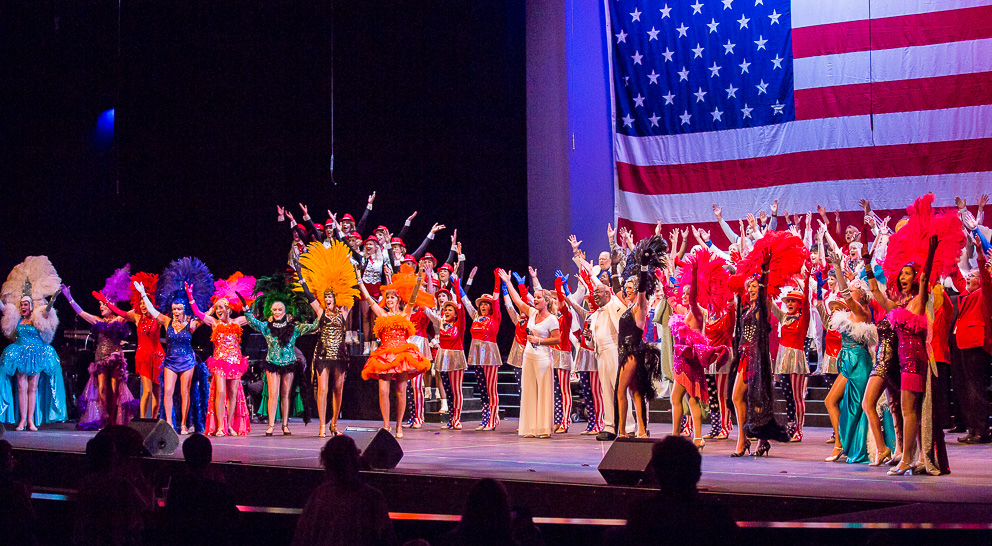 Shoppers at the soon to be closed Valley View Mall got a surprise treat this summer as The Spectacular Follies again moved in to rehearse for its 2016 production “Bravo Broadway”. The sounds of music, laughter and tapping toes filled the corridors of the mall with a bit of joy as over 100 cast members piled into the Community Room to sing, dance and prepare for the upcoming Follies. The Spectacular Follies has used Valley View for rehearsals for several seasons bringing life to the quiet shopping center and amusement to the shoppers and remaining tenants. Now in its 8th successful season, the Follies will kick off in September. A great show is planned for this year, a tribute to Broadway.

When someone hears the phrase ‘Tony Award-Winning musical‘, it conjures up a mental picture of the finest of Broadway musicals.

The Tony Awards recognize achievement in Broadway productions by celebrating excellence in the theater. The award for Best Musical is one of the ceremony’s longest-standing awards, having been presented each year since 1949. Many of these musicals are still being presented as revivals across the country to high acclaim due to their long-lasting greatness. To celebrate its 8th season, The Spectacular Follies will present “Bravo Broadway”, an all-live, all-new tribute to Tony Award-winning Broadway musicals that will feature many of the songs and dances that audiences and critics loved on Broadway from the Golden Years through current, contemporary musicals.

With performances from classic Broadway shows like “Oklahoma”, “South Pacific”, “Evita” and “Music Man” to more modern shows like “Phantom of the Opera”, “Crazy for You” and “La Cage Aux Folles” to the latest Tony winners like “Beautiful – The Carole King Musical”, there will be something for everyone in the family to tap their toes to and sing along. Staged with great scenery, gorgeous musical arrangements performed by our live orchestra, beautiful costumes and a cast of over 140 talented, professional entertainers who happen to be over the age of 55.

The Follies is not a senior amateur show, our cast of talented performers comes from many different professional backgrounds like Las Vegas, Broadway, Hollywood and other places across the country and all enjoy performing and showing their talents to other seniors in the area.

The Spectacular Follies has come a long way since it began in 2005 as a dream shared by Ned Startzel and Mark Carroll. Ned, a retired businessman and former Vaudeville performer and Mark, Dallas’ own “Piano Man” came up with an idea to stage a Senior Follies showcase to highlight the talents of local seniors who love live theater and wanted to continue to perform.

After years of planning, the dream of both men became a reality in September 2008 when the Spectacular Follies debuted on stage at the Eisemann Theater. The Follies was an instant success and Ned and Mark never looked back. The Follies has become a yearly theatrical event and it is celebrating its 8th year entertaining the Dallas Metroplex.

Featuring a cast of professional entertainers, the Follies presents dancers, vocalists, comedians and the highlight of the Follies, the famous Follies Showgirls, who appear in lavish, over the top costumes to the delight of the audience. Young and old, the Follies offers something for everyone to enjoy.

The Follies is directed and choreographed by Broadway Tony winner, Michael Serrecchia. Since leaving New York, Michael has directed many successful productions in Dallas and the North Texas area and is the recipient of many coveted awards for his work. The Follies artistic director, Dee Anne Meece, started out as a jingle singer for many national companies and later was featured in many equity theater musical roles. Dee Anne creates and performs in shows at her family’s theater in Savannah. Andy Michlin, musical director, has worked with show business giants like Tom Jones, Lisa Minnelli and Linda Carter. Andy was also a member of the New Christie Minstrels. Bill Geyer, who has had stints with the Harry James, Orrin Tucker and Don Ellis Orchestras, will again direct the Up Swing big band. Michael Robinson, Follies costumer, will outfit the cast and the lavish costumes for the Follies Showgirls, using all the sequins, rhinestones, feathers and beads he can find.

Also in the cast are Dallas’ favorite storyteller, Rose-Mary Rumbley, Jackie Troup Miller, whose fame started as a tap dancer from the golden days of Hollywood musicals, acrobatic dancing sensations, The Collettes, and many of your Follies favorites, including The Tap Dazzlers and Class Act Tap Company and many other surprise guests.

Not only will this year’s Follies feature the best-of-the-best of Broadway, but it will also present a patriotic tribute to America honoring our military veterans with song, dance, and flag-waving. There is never a dry eye in the house and the finale always brings the audience to its feet.

The part of the evening the cast enjoys most is greeting the audience in the lobby after each performance and speaking one-on-one with the many people who attend. People stare with awe at the gorgeous costumes of the Follies Showgirls and enjoy meeting the cast in this informal setting. As one cast member said, “We greet old friends and meet new fans every year, the people in the lobby are just fantastic to us and always say they’ll come back again with even more friends next year, and they do!”

The Spectacular Follies entertains hundreds of senior-aged audience members at the daily matinees. You can tell from the fleet of buses in the parking lot that the Follies is a favorite outing for the many independent and assisted living homes that bring their residents for an afternoon of fun and a chance to relive the days of live theater. The mix of seniors, middle-aged and young children makes the Follies a true family destination that everyone can share together. The Follies presents wholesome entertainment for all ages and theater tastes.