The 2017 Production Of The Fabulous 50’s Comes To Dallas 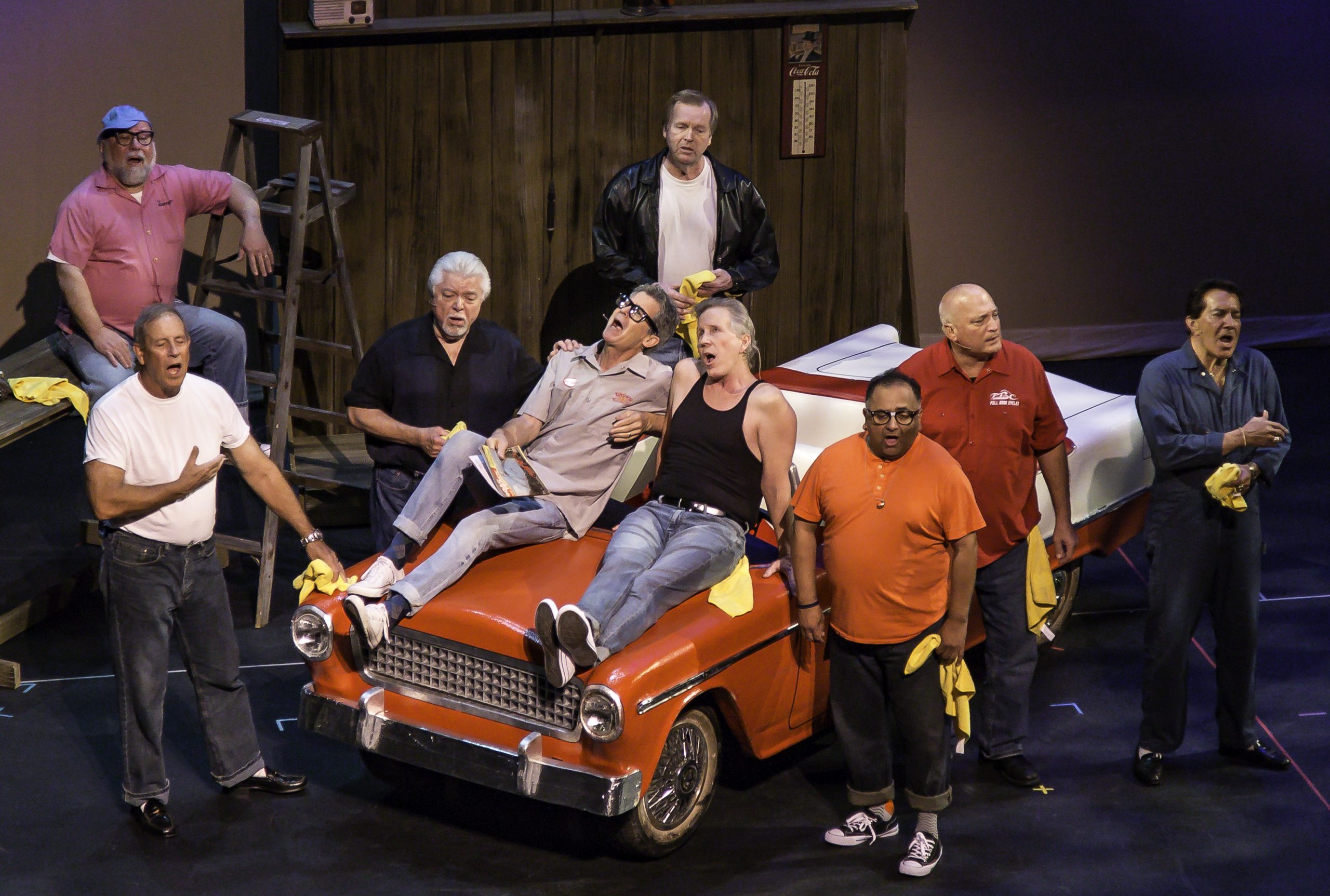 Celebrating their 9th big year, the Spectacular Follies is presenting an all-new, all-live, on-stage show, “The Fabulous 50’s”, featuring the music, dancing and comedy of 1950’s, while paying a nostalgic tribute to hula hoops, poodle skirts, bobby sox, 45 rpm records and television sets with only three channels. The audience will be transported to these glory days and will be singing along and “twisting the night away” as the cast recreates the energy of American Bandstand — with all your favorite Top 40 hit songs.

The Spectacular Follies is happy to announce that special guest performers, Dallas Doo-Wop, will be joining the cast of the 2017 Follies, “The Fabulous 50’s”.

Dallas favorites for many years, Dallas Doo-Wop will recreate the many wonderful songs we all loved during the most fun musical decade ever, the 1950’s. You’ll sing along and tap your toes as your favorite Doo-Wop songs are presented.

The 1950’s were a time of change and the music of the decade both reflected the cultural changes that were happening while still holding on to the societal norms of the past. Following the detrimental effects of World War II, the United States was about to embark on a musical journey that would change the face of music for decades to come. Traditional pop and country music clung to the past with old standards remaining popular in the early part of the decade but mid-decade Rhythm & Blues (R&B) and Rock ‘n’ Roll rose to prominence and enjoyed success, paving the way for future music. Either way, this decade was a time of innovation that helped to influence everything that we listen to on the radio today.

Musical stars like Nat King Cole, Rosemary Clooney, Perry Como, Tony Bennett, Peggy Lee, Ella Fitzgerald, Frank Sinatra, Patti Page, and Pat Boone led the early fifties with tuneful and light-hearted music but the younger generation felt left out of this genre and looked toward sounds that spoke to their generation. This led to the beginnings of Rock and Roll featuring new voices like Elvis Presley, Chuck Berry, Jerry Lee Lewis, Little Richard, Chubby Checker, Little Richard, Buddy Holly, and many more. Following on their footsteps came the wonderful groups who introduced Rhythm & Blues to a new generation of listeners. Groups like Billy Haley & the Comets, Frankie Lymon & the Teenagers, The Orioles, Ray Charles, and the Platters gave the younger generation a voice of their own.

The Follies is directed and choreographed by Michael Serrecchia. Director of many successful productions in Dallas and the North Texas area, he is the recipient of many coveted awards for his work. Michael’s professional career began in modern and classical dance with the Jose Limon Youth Company and The Harkness Ballet in NYC. It was at Harkness House that he met and studied with the great American Jazz teacher Luigi.

In NYC he studied acting with Mary Tarcai (Stanislavski) and Fred Kareman (Meisner Technique, Neighborhood Playhouse). He studied voice with Sylvia Sirlya of the Metropolitan Opera and the famous Keith Davis. But mostly his training came from the practical experience of performing on Broadway for 18 years, in many original Broadway Musicals.

As an original cast member of A Chorus Line, Michael was part of American Musical Theatre History. That experience was invaluable to him.

Michael’s approach to directing and choreography is explained as basic Meisner – “to live truthfully under given imaginary circumstances”. Michael strives to remain true to the author/composer’s work and incorporate a strong point of view and style in agreement with the producer and ultimately the cast. “I work within the parameters set by the production and cast. I never “force” a performance. I nurture it organically.” In 2011, Michael was selected for the Natalie Skelton Award for Artistic Excellence award for having “invested my life to artistry, teaching, and directing at a truly outstanding level.” In 2015 he, along with the rest of the original cast of A Chorus Line, was honored at The Public Theatre in NYC for my contribution to the American Musical. The Spectacular Follies is beyond thrilled to be led by Michael.

Dee Anne Meece is happy to be part of the Spectacular Follies for another season as Artistic Director. Dee Anne is from Dallas and is an accomplished singer and actress and has performed with many celebrities, such as Bob Hope, Dolly Parton, Larry Gatlin, B.J. Thomas, Johnny Cash, Glenn Campbell, Jimmy Dean, Tommy Tune, and Sandy Duncan to name a few. She has sung national commercial jingles for General Motors, Nabisco, State Farm Insurance, Dairy Queen, Southwest Office Systems, Six Flags and many more. Dee Anne has played leading roles in equity regional theatre productions and some of her favorites include: MUSIC MAN, OKLAHOMA, HELLO DOLLY, GUYS & DOLLS, THE LITTLE SHOP OF HORRORS, THE SOUND OF MUSIC and THE KING AND I. Dee Anne owns a successful Interior Design and remodeling business and continues to coach singing and do studio recording. She and her husband Michael, (who is a theatrical producer) own a very successful theatre in Savannah, Georgia.

Andy Michlin, musical director of the Follies since the first year, has worked with show business giants like Tom Jones, Lisa Minnelli and Linda Carter. Andy was also a member of the New Christie Minstrels.

Bill Geyer, who has had stints with the Harry James, Orrin Tucker and Don Ellis Orchestras, will again direct the Up Swing big band. Michael Robinson, Follies costumer, will outfit the cast and the lavish costumes for the Follies Showgirls, using all the sequins, rhinestones, feathers and beads he can find.

The Follies is not a senior amateur show, our cast of talented performers comes from many different professional backgrounds like Las Vegas, Broadway, Hollywood and other places across the country and all enjoy performing and showing their talents to other seniors in the area.

In 2005 Ned Startzel and Mark Carroll, two former Dallas showmen, came up with an idea to stage a senior showcase to highlight the talents of local seniors who love live theater and wanted to continue to perform.

After years of planning the Spectacular Follies debuted on stage at the Eisemann Center for Performing Arts in 2008. The Follies was an instant success and has become a yearly theatrical event and it is celebrating its 9th year entertaining the Dallas Metroplex.

Featuring a cast of professional entertainers, the Follies presents dancers, vocalists, comedians and the highlight of the Follies, the famous Follies Showgirls, who appear in lavish, over the top costumes to the delight of the audience. Young and old, the Follies offers something for everyone to enjoy.

The Follies will again present a patriotic finale tribute to America honoring our military veterans with song, dance and flag waving.

The Spectacular Follies entertains hundreds of senior-aged audience members at the daily matinees for an afternoon of fun and a chance to relive the days of live theater. The mix of seniors, middle-aged and young children make the Follies a true family destination that everyone can share together. The Follies presents wholesome entertainment for all ages and theater tastes.

The Follies will run 5 performances in Dallas at the Eisemann Center for Performing Arts from Thursday, September 14 through Sunday, September 17 with matinees daily at 2 pm. There will also be an evening show on Saturday, September 16 at 7 pm.